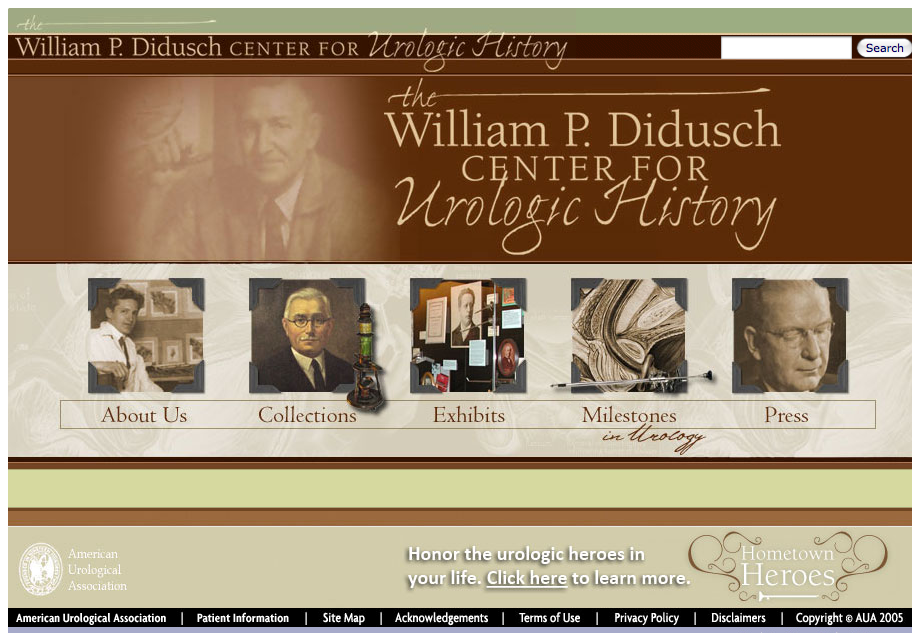 A new facility, a new museum space, and now a new interactive website:

Fairman Studios was asked to design the website for the American Urological Association’s William P. Didusch Center for Urologic History. Presently located at the newly built headquarters of the American Urological Association in Linthicum, MD is the William P. Didusch Center for Urologic History of this Center is named in honor of William P. Didusch. Didusch was a scion of a family of artists in Baltimore and one of the first pupils of the renowned Max Brödel, Director of the Department of Art as Applied to Medicine at the Johns Hopkins School of Medicine. This was the first full-fledged department of medical art established by a medical institution. The Center encompasses a rich and varied collection of drawings, photographs and instruments of historical importance to urology, many displayed in urological exhibits, in addition to a Library devoted to urological and early medical texts and the AUA archives.

History of the William P. Didusch Center for Urologic History

The William P. Didusch Center for Urologic History of the American Urological Association (AUA) is presently located at the AUA headquarters in Linthicum, MD. The Didusch Center is named in honor of William P. Didusch, a world-renowned medical artist at the Johns Hopkins Brady Urological Institute, and the first curator of the AUA’s museum. The museum was conceived by Didusch and opened in 1971. Didusch remained curator until his death in 1981, and was succeeded by Dr. Herbert Brendler. Dr. William W. Scott—who worked with Nobel Laureate Charles Huggins at the University of Chicago and later became director of the Brady Urological Institute at Johns Hopkins Hospital—assumed the position upon Brendler’s death in 1986. Upon his retirement in 1993, Dr. Rainer Engel, also of Johns Hopkins became curator and remains in the same position today.

The Didusch Center encompasses a rich and varied collection of drawings, photographs and instruments of historical importance to urology, many displayed in our urological exhibits. The center also houses a library devoted to urological and early medical texts and the AUA archives.

The museum collection features most of Didusch’s original drawings, as well as an impressive instrument collection—gained primarily through donations by urologists such as Dr. Ernest F. Hock of Binghampton, NY, Hans Reuter of Stuttgart, Germany and Dr. Adolf A. Kutzmann of Los Angeles. There are also many antique medical books and modern texts. Donations continue to come to the center, where they are carefully catalogued and stored for study and future displays. Donations of materials or funds are appreciated.

Among the instruments are early Nitze cystoscopes from 1890 with platinum loops for illumination, a Nitze Cystoscope used to cauterize bladder tumors with a platinum wire at the end of the instrument, walking canes to hold catheters, rotating cystoscopes and operating resectoscopes, old electro-surgical units, glass jars and cabinets forsterilizing urologic instruments using formaldehyde or cyanide and innumerable cystoscopes from the incandescent bulb era up to the present fiber-optic systems. Another interesting acquisition is a collection of more than 30 microscopes dating back to the 1700’s and books about these instruments. This stunning collection was part of a private urology museum owned by a German urology family. The microscopes are on a long-term loan to the Didusch Center.

The original William P. Didusch Museum (now known as the William P. Didusch Center for Urologic History) was originally housed in the AUA’s Baltimore City headquarters building. Upon the association’s move to Linthicum, MD in 2003, the museum has evolved into the William P. Didusch Center for Urologic History and taken on new tasks and responsibilities that include a research library and archives. Curator Engel continues to create fabulous historical and educational displays for the AUA Annual Meeting; notable exhibits include The Development of the Cystoscope and the 2004 exhibit Fact, Fraud, Future: Quackery and Nostrums in Urology.